Jpop: Okay AKB48, you really are freaking me out now

I like J-pop. It's true. I genuinely enjoy Japanese pop music and have quite a large collection. I even present a radio show about it on some tiny god-awful community radio station (it's not a popular show and everyone at the station hates me). So yeah, I do like j-pop and I don't care who knows it. But AKB48 are just the most monstrously relentless j-pop machine and I think they're going to enslave the planet.


The English subtitles on this Morning Musume hit are rather fun

It all started with Morning Musume, a manufactured girl group who have quite a lot of members. In order to keep the interest of the fans, the members of Morning Musume "graduate" from the group when they hit a certain age and new members are brought in. The girls are encouraged to be effectively "blank canvases" upon which a personality and role in the group will be placed. There are several sister groups to which graduate members can move and from which new members can be drawn. It's a slick operation and the constant turnover of members ensures a level of freshness. The downside is that the management are very strict and controlling to the point where one girl was sacked for smoking in public as it was at odds with the image chosen for her. 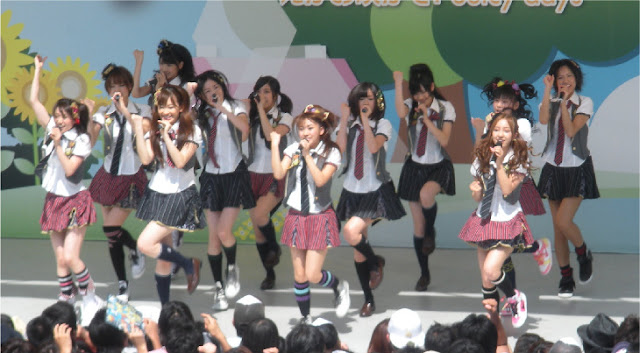 Momusu (as us seasoned j-pop fans sometimes call them) might seem extraordinarily manufactured and somewhat sinister, but AKB48 have taken the same idea and just run with it. It seems that every teenage girl in Japan is a member of AKB48. The main group is comprised of four teams (A, K, B and 4) of sixteen members. The point of this is to allow them to perform live every day - the band has its own theatre in the Akihabara (hence AKB) area of Tokyo with the teams taking turns to perform.

Now you might think that it would be difficult to sell out a theatre three times a day, every single day but AKB48 are so popular that tickets are sold out years in advance and are allocated by a lottery. Girls audition to join the various sister groups (of which there are fourteen at my last count) and then elections are held to choose girls to promote to the main group. To give you some idea of the level of their popularity, at the last election, more than a million fans voted. Cleverly, the voting forms are distributed within certain singles, so you have to buy one in order to vote.

It's not just theatres that are part of the AKB48 empire as there's a chain of shops too selling nothing but AKB48 stuff and there are now even cafes being opened all over their sales territories. The group controls every aspect of their business and makes sure that fans are always able to spend money on AKB48 music and merchandising at any time.

Since their debut in 2005, AKB48 has been through (by my count)... 147 members. The fourteen sister groups all have multiple teams of 16 members too making for a total approaching around 1,000 current and former members in just a few years. By the end of this article, that number will probably have doubled.

As a further example of the marketing genius behind the group, sister groups are based in other cities and even countries in order to expand the brand and make sure that fans are able to (pay to) see their local chapter any time they like. The sister groups include: NMB48 in Namba, Osaka; SKE48 in Sakae, Nagoya; JKT48 in Jakarta, Indonesia; TPE48 in Taipei, Taiwan; SNH48 in Shanghia, China, etc, etc.

AKB48 have dominated the charts in Japan since 2005 and often have more than one single charting at the same time. Obviously the girls don't play any instruments or write any songs - that's down to the evil genius behind it all and a team of composers. The music varies but is usually bubblegum pop of some variety, but what's truly amazing is the way that Akimoto Yasushi is able to dream up bizarre marketing ploys that keep the band in the news as well as the charts.

For instance, last year he created a CGI member of the group. Yes, that's right - a thousand girls weren't enough so he had to digitise them and make a computer composite. She (it?) appeared in an advert for candy (Ice no Mi - which I've tried and is quite nice) and then a video was released explaining how it was done.


The current fuss is over another advert for confectionery which is a remarkably clever way of getting teenage lipstick lesbianism onto mainstream TV during peak hours. Various groups have appeared on the news to condemn them for promoting fake homosexuality to impressionable children, but one has to wonder if the management aren't actually paying these groups to pretend to be outraged.

Just for kicks, Akimoto arranged for several of the girls to be trained to play instruments well enough to be able to actually play one song live (although they still needed a few real musicians in there to carry them and they're not very good). The official AKB48 anime series is in production right now and will be released later this year.


The latest wheeze is that AKB48 have launched their own ISP. As well as (surprisingly good) broadband, they offer exclusive access to various offers as well as various online features not accessible from anywhere else. Just click on the video above and be freaked out by the baby predictor. Yup, you can upload a photograph of yourself and they'll calculate what your offspring would look like if you mated with a member of the group. Crikey.


I've just realised that I've got to the end of this article without actually showing you any of their music. Well, here's an astonishingly popular song about birthdays. Don't enjoy it too much though - the youngest one is eleven years old. Despite all the appalling j-pop rubbish that I like, I don't actually like AKB48. It's hard to avoid them though and I fully expect Akimoto Yasushi to take over Japan in a bloodless coup and reveal that they're actually all robots.
Posted by kodabar at 08:00

Email ThisBlogThis!Share to TwitterShare to FacebookShare to Pinterest
Labels: AKB48, I for one welcome our new robot overlords, Japan, jpop, ridiculous