DayZ - How to get on a server 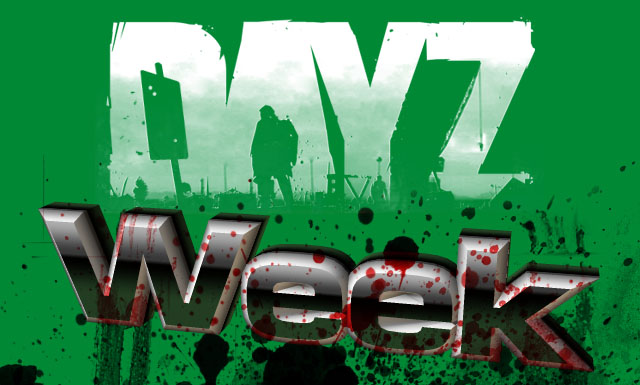 DayZ has gone from unknown to massively popular in a very short time and there aren't many servers, so it can be quite tricky to get on one and it's hard to know exactly what to do to ensure success.


The developers of DayZ have to approve all new servers and they've been inundated with offers recently, but have still only approved a few. The servers all communicate with a central database which means that your inventory and location remain consistent across servers - switch to another and you'll have the same kit and be in the same place. The lack of servers can mean it takes a long time to find one that you can actually join, so be patient - it is worth it.

It may seem a little odd to have all the game servers need approval but this is in order to prevent abuse. There's already been one server where the admins hacked in weapons that aren't supposed to be in DayZ and there was a case of another where players were being kicked just for killing the admin or any of his friends. So a tight rein is being kept on all servers to make sure they're fair and consistent for all. Servers are required to have SQL installed as, in the future, they will be running their own localised databases.

So how do you get on a server? More after the jump... 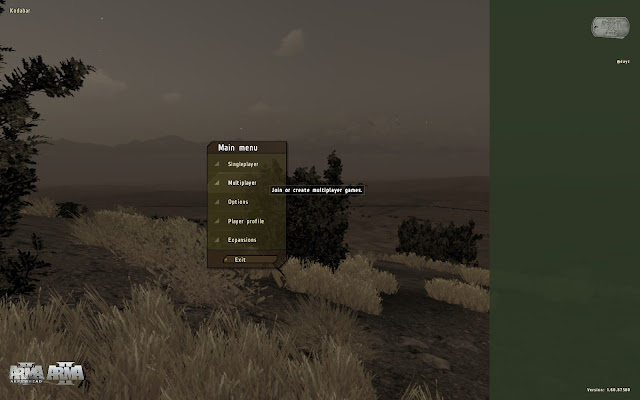 This is the main menu screen. If you haven't created a profile, do so now. The username you choose will be the one that appears in-game. If two players have the same username, a number will be appended. With profile created, click on the Multiplayer button and it'll take you to the server screen. 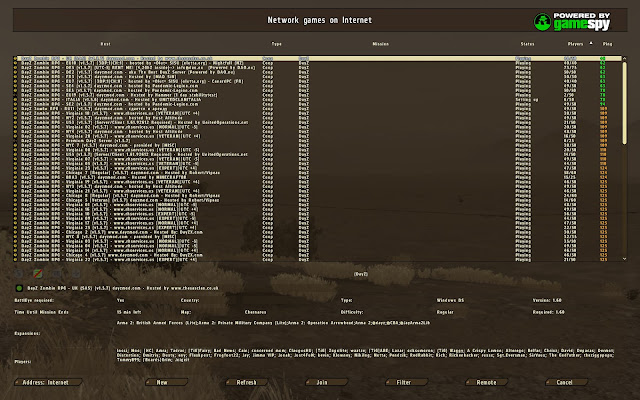 Okay so here's the list of servers. You'll find that there are loads of them, but most are actually running ArmA 2 and not DayZ. So here's what you need to do to only see DayZ servers. 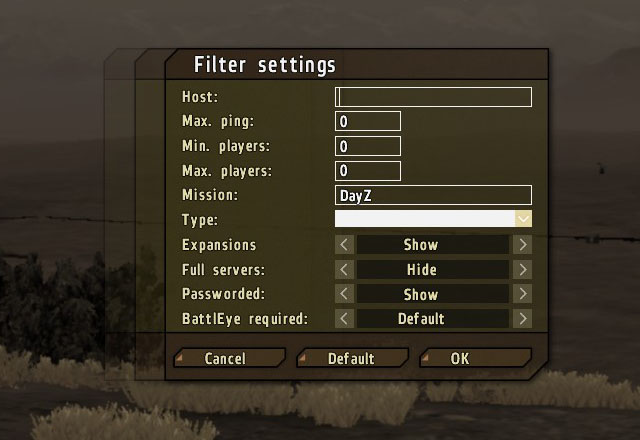 Click the Filter button down at the bottom and this little box pops up. Down at the Mission box, type in DayZ (with the correct capitalisation). You should make sure that Expansions box is set to Show. You can also set it to hide full servers if you want to narrow the list down a bit. 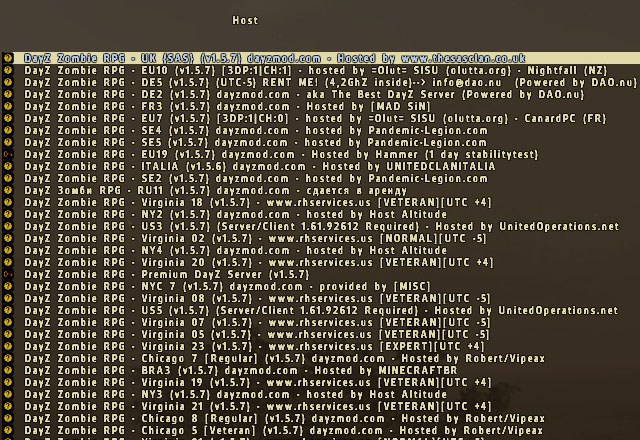 Have a look at the list of server names. You can click where it says Host at the top to have the servers sorted by name. The servers are all named according to their (rough) location. UK servers are in the UK, NY servers are in New York, etc. It's not a great idea to try and join a far off server with a high ping and many servers will kick you above a certain ping level.

Also note that servers run in real time. There's 16 hours or so of daylight and 8 hours of darkness so you'll have to try to judge which servers are likely to be dark. What with resets and stuff, servers don't accurately track the local time, but they do tend to be around that by default. Also notice that some servers have a little key icon which means they're passworded (and you won't know the password). Some servers may also have a little padlock which means they're locked ad you can't get on - this is normally when a server has had to be reset or has crashed and they're preventing players from hammering it whilst it restarts. 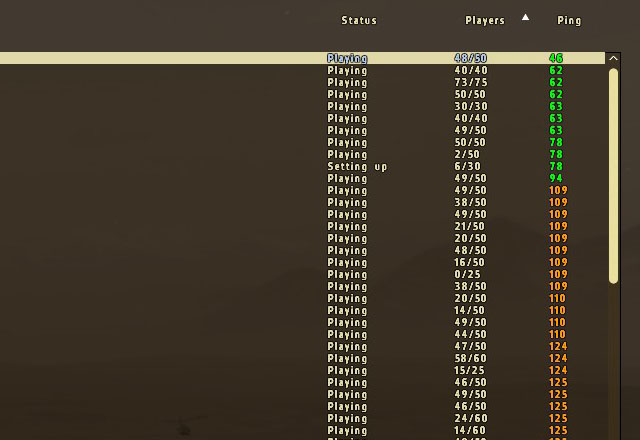 The server's status will show if it's up and running. Anything other than Playing will not work for you. Look along the list and you'll see the number of players on a particular server. The default maximum is 50, but some are less than this and some are a bit more. If you see only a handful of people on a server, chances are it's crashed (and some player names are stuck on there) or it's night-time. And the night is very, very dark (you might not be able to tell the sky from the ground) and turning up the brightness on your monitor or in the game settings isn't likely to help very much at all.

Although you might care about your ping in most games, it really doesn't matter too much here. Servers with a green ping are preferable, but an orange coloured ping won't be noticeable. If it's red, you're not going to be able to connect anyway. Some servers have a ping limit and you'll be kicked if you exceed it - not immediately though (you'll get on for a minute or two).

When you've chosen a server, take note of the name - it won't be mentioned again and if you want your friends to join you, you'll need to be able to tell them the name. 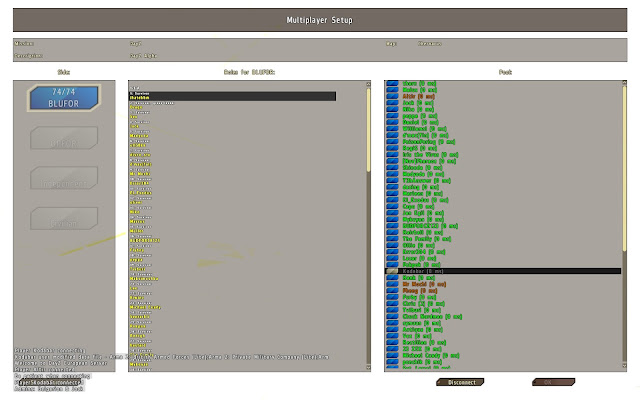 This screen will pop up next. You'll see a list of all the player on the server. At this point you don't need to worry about whether you're able to get on or not, you're now counted as having joined the server, even though you haven't actually spawned in. 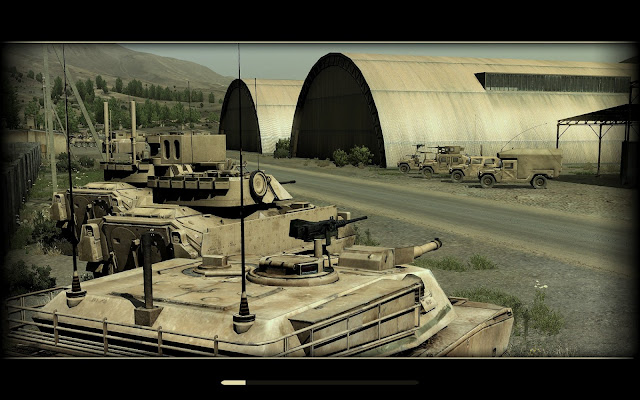 Don't get too excited by this screen. There aren't any tanks and APCs in the game. 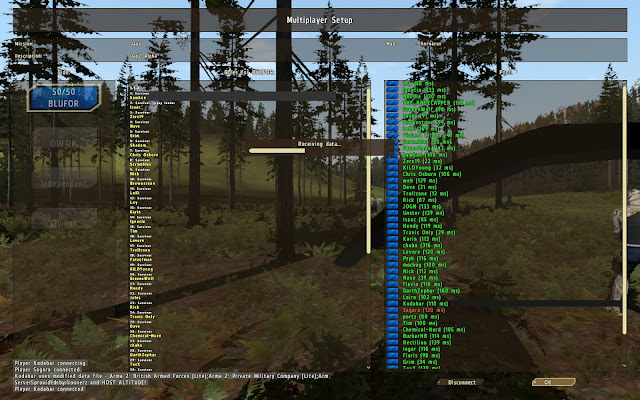 When you see this screen, it might look like things have gone wrong and you've been dumped back to the lobby and that you need to click other buttons. You don't. Everything is fine and it's progressing normally. The Receiving data bar in middle of the screen may stick for a while, but bear with it. If it hasn't moved within a minute or two, things are broken and you'll have to press Escape and quit out. 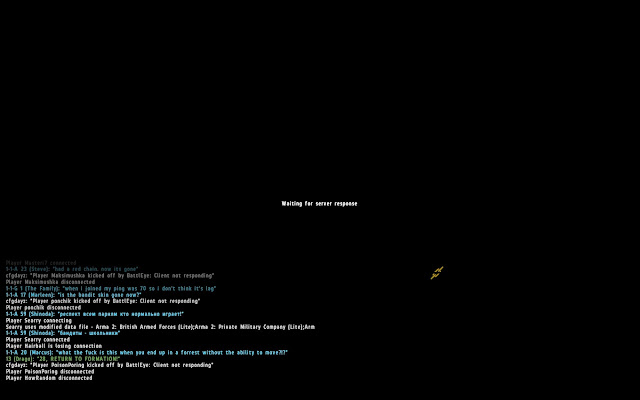 This is the screen you're most likely to get stuck on. The Waiting for server response message might be up for a while. When you're waiting here, you'll be able to see message from other players. Green ones like that RETURN TO FORMATION one are a part of ArmA 2's comms system and nothing to do with DayZ - people like to press those buttons whilst they're waiting. Sigh. Take note of the messages to see if any of them are from players within the game talking to each other. If you don't see anyone talking like they're actually in-game, then chances are the server isn't loading.

You might be stuck at this screen for quite a while. Generally you won't be here for any more than a couple of minutes at worst.

Also take note of that little yellow broken chain icon. I don't actually know what it means specifically, but it seems to relate to the server losing communication with your game client, but it's not a big deal. There's a red one as well, but it's equally harmless. The server passes your save data to the database every minute or so, so losing connection for a while isn't  a big deal. 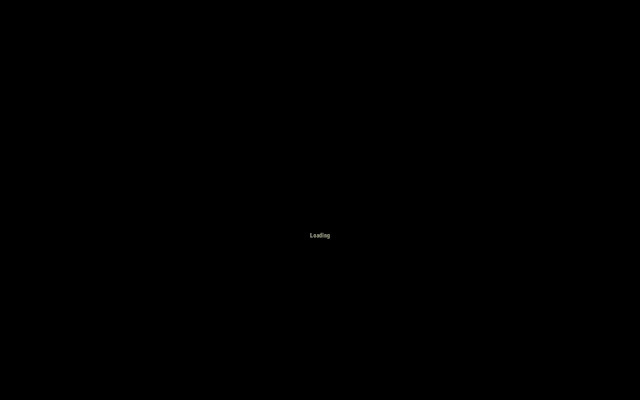 This is the next screen. Once you see this, you're definitely going to spawn in the game. It might take another minute or so to finish connecting, but you're in. 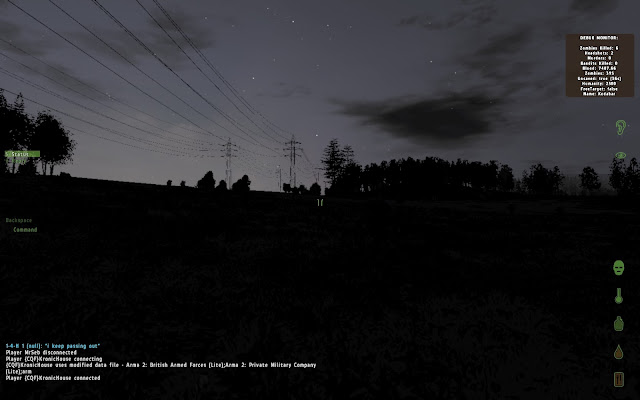 You're in and... crikey, it's dark. Actually it gets much darker than this. If your character has a watch (and you won't if you haven't played before), then you can take it out and look at it (default key O) and try to judge whether it's about to get light or not. Sunset is around 7pm and sunrise around 5am, although your watch can't distinguish between am and pm, so use your judgement. If it's too dark for you to play, then just quite out and pick another server.

You might notice a few messages in the chat window thing. If it mentions that you have modified files or something, that's fine. If it says you have a deleted file, that means you haven't installed the game properly (usually it's because you need to copy the addons folder from your ArmA 2 folder to your Operation Arrowhead folder). 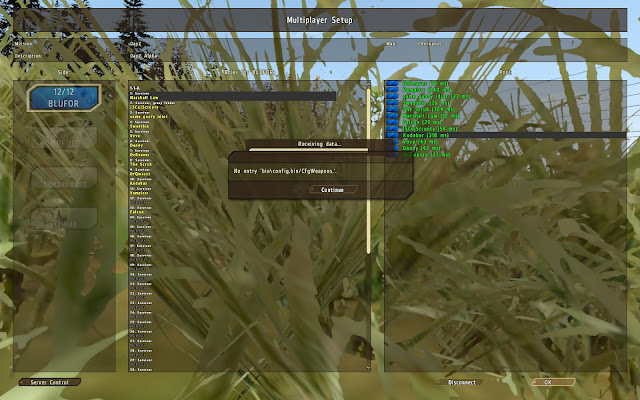 You might see errors like this one either whilst you're loading, shortly after you've loaded or even half an hour into the game. You can just click Continue and ignore them - it's not a problem.

Well done you! You've managed to install the game and even get onto a server. Come back tomorrow I'll tell you how to play.