There are few TV programmes that my wife enjoys more than all those customs and immigration shows. Her favourite has to be the Australian one Border Security. I quite like it for its ridiculously overblown attitude and stupid sense of self-importance. Just look at that subtitle: "Australia's Front Line" - it might just about be literally true, but taking plant cuttings out of the bags of tourists isn't quite the same as say, serving in the military in an actual conflict.

The introduction to the show bangs on about how this elite group of men and women have "dedicated their lives to protecting Australia's borders" whereas it might more accurately be termed "couldn't get a job anywhere else". But still, it is a bit of a laugh. My wife likes this Australian show the best because it has the highest proportion of Chinese people on it. And they're all guilty. Every single one of them has illicit food in their bags. 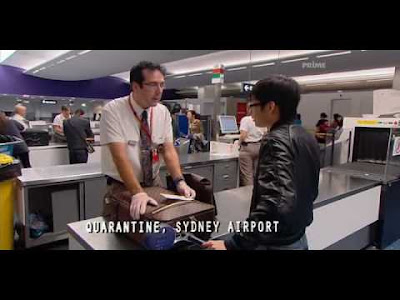 Every conversation between the customs agents and the Chinese travellers goes exactly the same way:


Customs Guy: Do you have anything in your bag that you ought not to have?
Chinese Traveller: No.
Let's have a look. Hey, there's lots of food in here.
I don't know anything about that.
You frigging do. It's your bag.
That food is all fine.
No it isn't. It's very much against our rules.
I don't know anything about that.
You frigging well do. You were given a card, in Chinese, that explained all the rules and you signed it to say that you'd read them and had nothing in breach of them.
I not understand card.
You bloody well did. And hey, this bag of sweets is made of Triffids! Do you realise that these could harm the delicate Australian ecosystem?
I not know about that.
What's happened to your English? You were fluent a minute ago...
Me know nothing.
Right, well, I'm going to let you off with a warning this time. But if you do this again, you might have to pay a small fine.

Loads of fun. I don't know why they don't just grab every single yellow person that goes through Australian airports as they all have food in their bags. It's like on those American highway patrol shows where every person they pull over for a routine traffic stop has dope in their car.

However, there is one border show that doesn't appear to have been made yet that really ought to be.

Just imagine what that show would be like, eh? When Chinese customs agents find something dodgy in a bag, it's not going to be anything as pedestrian as a bag of noodles. And for a country that's not particularly interested in human rights, they'll probably do more than hand out fines and stern looks. Remember when that British guy got caught smuggling drugs, but he had learning difficulties or something and Gordon Brown ended up having to beg the Chinese (unsuccessfully) not to execute him? Wouldn't this be a great show? I'd watch it and I know the wife would. Wouldn't you like to see Chinese border guards kicking the shit out of student backpackers?

Let's have a look at some of the stuff Chinese border police have been up to recently:

Are you sure you wouldn't like to watch that show? Heck, I couldn't find a picture of this one, but in 2007 the Chinese border police seized a shipment of 270 smuggled crocodiles. I particularly like that the article says "the seizure was the largest this year in Guangxi" - rather implying that it wasn't even the largest seizure of crocodiles in China that year and that the Guangxi region has seen larger hauls in other years.