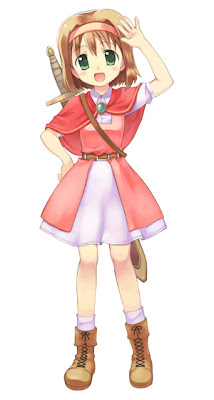 Fortune Summoners is a relatively traditional Japanese RPG. It's 2D, you're accompanied by various characters, there's magic and you hit stuff. Unlike most JRPGs, it's side-scrolling rather than top down which is a refreshing change. For those of you familiar with Recettear (the weird item shop RPG game), you'll be delighted to hear that this game has been translated by the same team at Carpe Fulgur and to the same high standard, retaining a lot of the humour and expression of the original Japanese text.

According to the laws of Japan, everyone is either a giant robot, a tentacled rape monster or a schoolgirl. Staying within the bounds of legality, you play Arche, a Japanese schoolgirl and you've just moved to a new town. In a very similar vein to Recettear, your parents run an item shop

The new school in which you're enrolled seems to take magic pretty seriously and a lot of class-time is devoted to the subject. There's just one problem: everyone needs an elemental stone for classroom practice and you don't have one. It turns out they're expensive and although your classmate turns out to be the daughter of an elemental stone seller, you're going to have to find one. Cue running around the landscape twatting monsters in a series of random encounters whilst you level up and improve your equipment.

I was quite keen to play this when it came out. I had a go of the demo (available on Steam for free) and it certainly piqued my interest. Effectively the demo is the first chapter of the main game and, rather neatly, your save game carries over between the two so you don't have to repeat anything.

Once I got going on the main quest I encountered a few frustrations. Quite often I didn't know what I was supposed to do next, or I did know, but had no idea of how to get going. When this happened, I tended to have to run around talking to everyone until I found out what to do. For instance, on about the second game day, we had the day off from school and I seemed to need to go and explore some caves. But I soon hit the problem of some impassable water and had no clue where to go next. After a lot of running about, I eventually found my classmate (who unknown to me could navigate water) hidden inside a small shed behind the school that I had rightly assumed would be deserted. That took me an hour to work out, so I was a bit pissed off at that point. Never mind; I probably just missed a clue somewhere as I have a habit of skipping through the text.

As I progressed through the game, other frustrations set in. The combat system is a bit deeper than just whacking someone with your sword - you can modify it with other button presses that allow for a quicker strike, a lunging stab whilst stepping forward, etc. In fact as you level up, more sword techniques become available to you and the manual explains that you can chain them together to form your own combos. Yeah? Well all my fights go along the lines of stabby, stabby, get hit by the monster, stabby, stabby, there's another one behind me, stabby, stabby, finally hit something, stabby, stabby stabby. It's not great. The manual suggests a level of finesse and planning that is entirely absent from my experience. Perhaps I'm just shit at it, but I soon found that just mashing the attack button whilst alternately pressing up and down tended to yield fairly good results leaving me entirely unwilling to bother learning combos.

One neat thing is that you can switch to control another member of your party at any time, so you can leave the computer to deal with the bladework whilst you concentrate on healing your swordsman and casting area attack spells. But it's this that throws up another frustration - the AI ain't too bright. Several times when I was fighting, my magic use managed to wander off a cliff edge and get killed out of sight from me. This left me to either fight through without a healer at my back or to just allow myself to be killed so we could redo that bit and continue on together.

Some of the monsters you fight are really fucking irritating. There's a bunch of merkids (geddit?) who have longer range melee attacks than you and have an annoying habit of jumping around everywhere so you'll be slashing away in one direction when they're suddenly behind you - and turning round in combat is surprisingly hard when you're wailing away on the attack button. Merkids are often accompanied by their own magic users who tend to heal them and cast area attack spells.

Fortune Summoners is a good game, but I did find it ridiculously repetitive. It doesn't help the the background graphics, charming as they are, are so similar that I frequently got lost. Trying to find my way back out of a dungeon or a cave was an exercise in annoyance as I couldn't remember which identical corridor or doorway I'd come through on my way there. Getting stuck and having to run around talking to everyone all over again soon got pretty frustrating too. And often the next step in a quest was to run to the opposite end of the map or return to a previously visited area with a new item or party member.

I've actually got to the point where I don't know if I'm going to keep playing. I've no idea how far I am through it, but I think I'll give it a rest for a while and see if I choose to come back to it. Most reviews I've seen have expressed amazement that the game was pretty much made by one guy (someone else drew the stills for the cutscenes apparently), but I find it hard to care about that kind of thing. I don't give a shit how many people were involved in a TV show or film, just whether it's good or not, so why should I care that only one guy worked on a game? And, to be honest, I reckon if he'd had another person there to point out how repetitive certain bits were then it'd be a better game.

It's 25% off on Steam at the moment (£9.74) and I still find it over-priced. If it was a fiver, I probably wouldn't think twice, but when it costs more than Terraria, I just don't feel that it's value for money. I loved Recettear which is essentially more limited, much more repetitive and even costs slightly more, but flowed more smoothly and just feels like a better game.

If you're looking for an RPG to play and you don't want to get into something like Final Fantasy Ten Billion, then by all means give Fortune Summoners a go - but try the demo first to see if you can handle the repetition.

Damn this blog layout. The screenshots are all hanging off the side. I'm going to have to rethink this. And no one will ever notice that the picture in the background is actually Alnwick castle and not the default pic. Grr, moan.
Posted by kodabar at 08:00